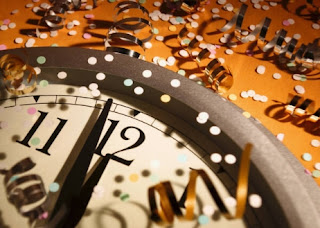 As I prepare for the coming of 2013, I think about what I have to accomplish in the last few hours of 2012 as well as those things I need to leave behind me. I rush out to the grocery store to stock the pantry and avoid being left with the last ragged, wilted bunch of collard greens. I grab a pretty set of undies, especially since I rarely buy them as a matching set. I wash every piece of laundry only to be overwhelmed with the task of folding and ironing it all after January 1. I scrub and clean until the only thing I will smell for the next two days is bleach. I pay personal debts, but make sure I have cash to keep in my pocket. *Sigh* So, why do I do it? Simple. Superstitions. It's tradition!! In a weird way, it's fun to go through some of the rituals.  But generally, it's something my family did or I picked up along the way. But this year I decided to dig deeper into a few of these New Year's routines and share as I make my way back to blogging.

Watch Night Church Service:- Although not on my agenda tonight, I've done the Holy ghost countdown several times.  This is a tradition that was founded by the Methodist in 1740, but gained new meaning in 1862 when President Abraham Lincoln signed the Emancipation Proclamation to take effect January 1, 1983. Many slaves attended church, waiting in anticipation and confirmation that their freedom would arrive at midnight.

New Year's Dinner: Somewhere on a my table, you will find some type of pork, greens, black-eyed peas, and cornbread among the choices. These items carry a great deal of history for Southerners and humbleness. During the Civil War, Union Soldiers raided homes leaving food that was not considered edible (hog jowls, greens, etc). However, these foods were used to survive, representing struggle and determination.  Today, we serve the meal to ensure a prosperous year using the ham hocks to represent plenty of food in your home, greens for money, black-eyed peas for luck, and corn bread for gold. If you're looking for a deeper meaning, hogs are known to only move forward to see resulting in progress.

Clean House and Donate: This is one I've always done never fully understanding why other than it just felt right. This tradition comes from those celebrating the Chinese New Year. One of beliefs is that you must get rid of any bad luck from the old year and make room for the good luck to come into your home in the new year.  However, you must do this before New Year's Day, otherwise you may mistakenly toss away your good luck. Likewise, nothing of value (money, jewelry, etc) should leave the house on New Year's Day unless someone has brought something. Another Chinese custom is to give away good luck gifts during the Chinese New Year; red envelopes with money inside.

Laundry Day & other no-nos: Who's doing laundry on a vacation day?? No clothes washing should be done on New Year's Day, otherwise you may wash away a loved one.

New Clothes:  Many of us are out shopping, while others are pulling a gently used dress from the closet. Chinese tradition, as well as many others, is to wear new clothes to represent new beginnings. Red is the color of choice to scare away evil, while black should be avoided. On the other hand, it has been said if you wear new clothes into the new year you won't get any new ones.

Men First: I always wondered why it mattered who entered the house first. Scotland brought us "Auld Lang Syne" as well as the "first-footing".  Neighbors brought each other coal for the fire or shortbread shortly after midnight.  If the neighbor knocking happened to be a tall, dark, and handsome man then luck shall be with you in the new year. In contrast, don't answer the door for any blonde or red-headed women or unattractive men. It could mean bad luck.

There's so many more I found to be interesting and possibly add to or replace my current ones. So, now it's your turn. What New Year's Eve/Day traditions do you observe?

Welcome to My World!!

This blog is not just about hair or health or shoes. It's just a few simple words on whatever has me popping my lips or curling my toes at the moment. Really it's just about the world through my eyes, my hunt for simplicity in living, and efforts to enjoy every minute of it.